Spring is one damn beautiful season. New life can be seen everywhere. Flowers begin to bloom, steams begin to flow and baseball is here to stay for the next 6 months straight. I absolutely adore the beginning of every baseball season. The phenomenal weather, the aroma of freshly cut grass, the sound of baseball bats cracking after connecting with the ball and endless amounts seed shells being spit directly onto the ground. Then there is the game of baseball itself. The game is both methodical and strategic, slow but fast, and has an infinite number of ways to be played. 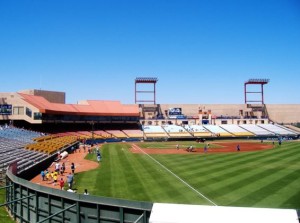 Well, if it isn’t clear yet let me just come out and write it plain as day. Baseball is fucking awesome, in the truest sense of the word. Unfortunately, lovely Las Vegas doesn’t have a major professional baseball team for its wonderful residents to support and watch. However, we have been graced with the next best thing in the Las Vegas Area 51s, a Triple-A (AAA) Minor League Baseball team.

If you have never had the opportunity to attend a game then this article is written specifically for you. I’m about to make you a Vegas 51s fan for life.

The best place to start is always at the beginning. Most everybody has heard something regarding Area 51 and that it has something to do with aliens. Area 51 is actually a United States military facility located north of Las Vegas about 70 miles. There have been many rumors and much speculation regarding Unidentified Flying Objects (UFOs) and extraterrestrial activity at Area 51 since the 1950s. Most everybody also has an interest in alien conspiracy theories. It was only natural that our Las Vegas AAA Baseball team change its name from the ‘Las Vegas Stars’ to the ‘Vegas 51s’ in 2001. Complete with an alien logo and an alien looking mascot named Cosmo. 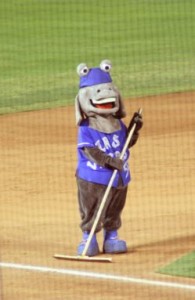 Currently, the Vegas 51s are in the Pacific Coast League (PCL) and affiliated with the Major League Baseball (MLB) team the New York Mets. The 51’s play their home games at Cashman Field located in Las Vegas at the intersection of N Las Vegas Boulevard and E Washington Avenue.

The franchise itself has been around for almost 100 years and was founded back in 1919. At that time the team was known as the Portland Beavers until 1972. Then the franchise moved to Spokane, Washington and played under the team name the Spokane Indians. Finally, in 1983 the franchised moved to Las Vegas where it still remains.

The Vegas 51s is a Triple-A (AAA) Minor League Baseball team. AAA is the highest level that a baseball player can reach before being selected to play in the big show, or Major League Baseball (MLB). The purpose of AAA baseball is to provide preparation for up and coming, talented baseball players. MLB teams are able to prospect and select individual players at the AAA level that they believe can play in the Majors and help their team win. In order to make this process more fair for all 30 MLB teams, they each become affiliates to one of the AAA teams.

The franchise has also changed which Major League Baseball team it’s affiliated to several times. The franchise was with the San Diego Padres for 17 years from 1983 to 2000. Next was the Los Angeles Dodgers from 2001 to 2008. Then the Toronto Blue Jays from 2009 to 2012, and currently the Vegas 51s are the affiliates of the New York Mets.

Some notable baseball stars that have come through the Vegas 51s franchise on their way to the big show include:

Like any other baseball sporting event, the Vegas 51s make sure your viewing experience is enjoyable as possible. Even though our team hasn’t won the Pacific Coast League (PCL) Championship since 1988, it hasn’t stopped fans from coming in full force to support their guys. Below are just a few of the fine promotions offered to everyone in Las Vegas.

The most recent ownership change happened in 2013. The Summerlin Las Vegas Baseball Club LLC purchased the Vegas 51s and are now making progress to relocate the team to a new stadium located in Downtown Summerlin, near the Red Rock Casino. The new stadium has yet to be built and the topic has ruffled some feathers. The projected cost of the construction project is around 60 million dollars. The ongoing debate is to determine who will be paying for the new stadium and whether a new stadium is even necessary. 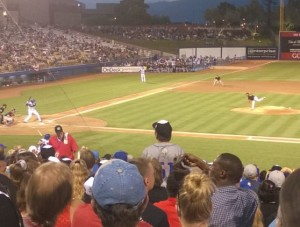 On one hand, Cashman Field is the second oldest stadium in the league and parts of the stadium reflect this. On the other hand, the current site where the new stadium would be built is just outside the city lines and therefore the City of Las Vegas does not want to contribute money. Then add into the mix that the Howard Hughes Corporation owns 50% of the Vegas 51s and is also contributing all the money currently being put into the development of the Downtown Summerlin project. Ultimately, we are left with a recipe for more interesting things to come.

Now that you know everything you need to know about the Vegas 51’s and baseball in Las Vegas the only thing left to do is purchase your tickets and watch some of America’s favorite past time. The first game of the season is on April 7, 2016 against the Fresno Grizzlies. Also, there is always a special game played by the MLB affiliate team before the start of the season. On April 1 the Chicago Cubs will be playing the New York Mets at Cashman Field. If you want to see the very best level of play in baseball then I suggest that you do not miss this matchup.

Can’t wait to see you all out at Cashman Field. Play Ball!